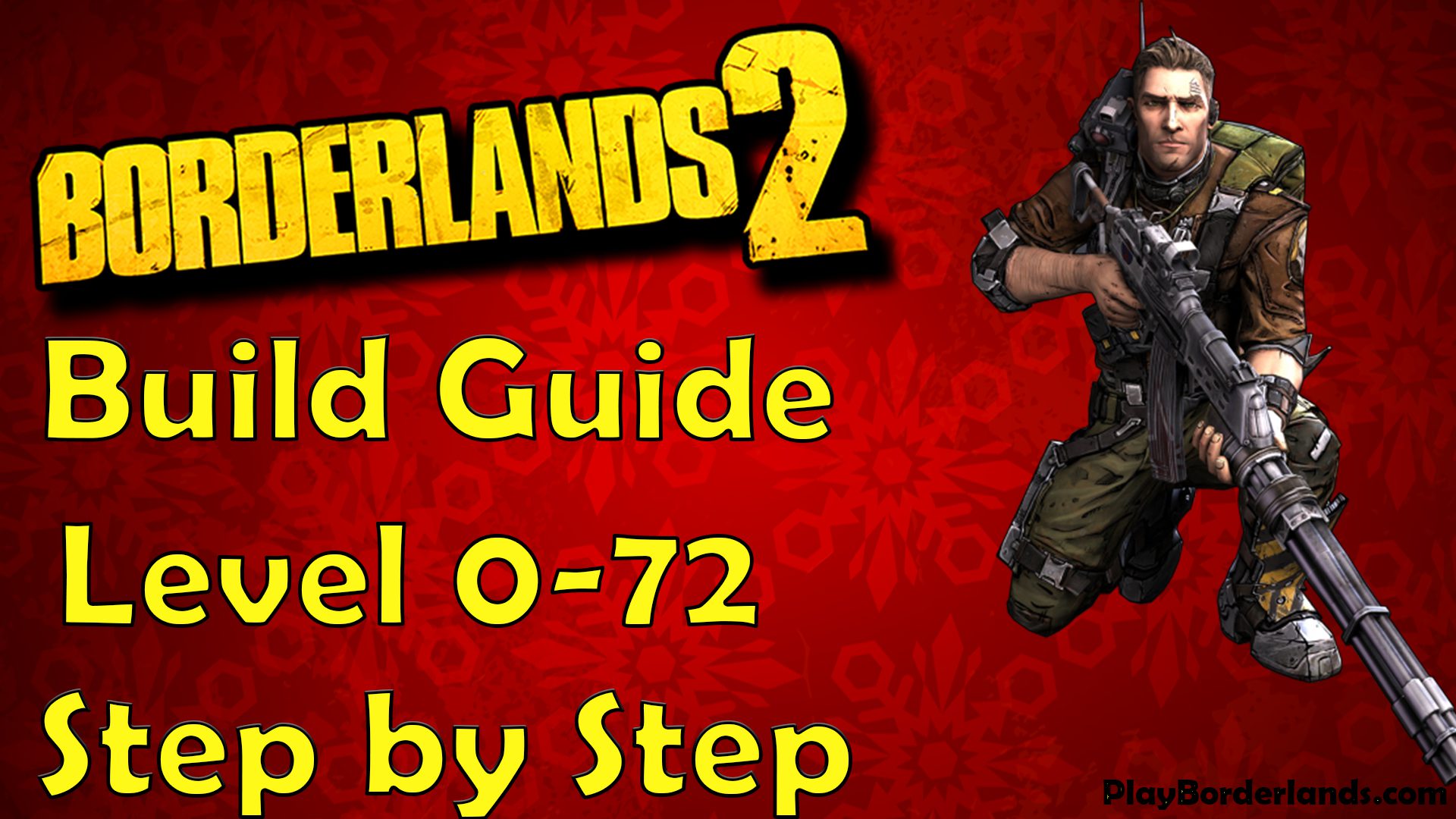 It is not easy to find well explained Axton the commando build. To start with there is a presentation of the character Axton, then its skills and to finish the Builds.

Axton, the commando, is a playable character in borderlands 2. He was a former soldier for Dahl’s army before being kick out and divorced by his wife. Axton is wanted for war crimes. The reward is 5.000.000.000$.

He decided to go to Pandore, where Dahl can’t go after him to assassinate him. For more details about his life check out this page.

Axton is for you if you like long battles and explosions. Many of his skills will make him Tank, more life and shield and better health and shield regeneration.

He’s also ideal for explosive damage if you love blowing things up. With the right skills, your explosives, grenades, and rockets will do the job.

Axton’s primary skill is the ability to deploy a turret in battle, which will automatically fire at enemies. Depending on which skill tree you decide to focus on, the turret abilities will change.

The advantage of the Turret is it attacks but also distracts the enemies from attacking you, and you can easily hide and shoot the enemies while they are focused on your Turret

Sabre turret: Axton can deploy a versatile Dahl Sabre Turret, a mounted gun featuring 360° rotation that can be upgraded with many weapons and abilities. The Turret’s duration is 20 seconds, and its cooldown is 42 seconds.

With this skill tree, all Axton’s characteristics are improved, such as his gun & critical damage, aim & fire rate, bigger magazine size for assault rifle… Most importantly, with this skill tree, the turret deploy range is improved by 10000%, and when deployed, it creates a small nuclear blast.

This tree is more a Healer/Defense: more health and bigger shield capacity, shield regeneration, shorter Turret cooldown. The Turret will deploy a shield, and it can also be deployed on walls and ceilings, with Gemini the last skill of the skill tree it makes it possible e to use 2 turrets.

Build Guides for Axton the Commando

Let start from the beginning with this Best Borderlands 2 Axton Commando Build guide.

During your first run, you will want to focus on the following skills: Impact, Metal Storm, Ready and Preparation, these skills will boost all your weapon general characteristics as reload speed, fire rate, recoil and damage. With them, Axton can manage to survive without being dependent on the Sabre Turret. I recommend putting your first point on Preparation, this increases your shield capacity by 4% for each level and adds a 0.4% health regeneration per second, useful when you are low life to deploy your sentry and go hide until life regenerates.

One of the big mistakes is to focus straight on getting the last skill of the branch, this will make you miss important skills making Axton vulnerable in critical situations.

If you follow this Axton the commando guide, then it should give you this as a start:

►level 0-5: Continue the game and push these levels up!

Level 5-10: Points on Preparation skill: Increases your Shield Capacity. Also when your shields is full you Regenerate Health.

Per level:
•Shield capacity +3%
•Regenerate +0,4% of your health per second when your shields are full.

Level 5:
•Shield capacity +15%
•Regenerate +2% of your health per second when your shields are full.

Now it is time to focus on improving that Sentry Turret! For this, you should unlock the following skills: Sentry, Scorched Earth. Putting these skill points will add more shots per burst and missiles are launched. With these new skills, your Sentry Turret will now cause serious damage, you will be surprised to see how fast it can clear up a room. The missiles cause radius damage so to optimize your Turret, use a singularity grenade at the same time deploying your turret. The grenade will attract the enemies at the same point and the Turret eliminates them easily with it missiles.

Now it is time to unblock Metal Storm and Longbow, these skills will add a bonus increasing Axton’s fire rate and precision when an enemy is killed by the Turret or by this commando character.
Longbow I find it useful as you can deploy your turret in a bigger range which may make a difference in crowded and complicated situations, it will take enemies attention away further from you.

Level 31-32: Points on Longbow skill: Your Sabre Turret can deployed using Longbow technology allowing you to deploy it much further away. Also, increases the Maximum Health of your Sabre Turret

Now the base is done, following this commando build guide must have given you a polyvalent character to play with him dealing good damage, health regeneration, fast reload speed and fire rate then on the other hand having the Turret dealing big damage to enemies even eliminating groups of foes will you have fun looting.
But it is not over! Now you have to choose your specialization.

The next step in this build guide for Axton the commando is where you choose.

The advantage of this build if unlocking two final tree skills; Double Up from the Guerilla skill tree and Gemini from the Survival skill tree. The main point of this Double up + Gemini build is having the ability to deploy two Turrets at the same time, with them shooting slag bullets.

This build is polyvalent, can be used in solo and in co-op. Your shield will be highly improved, damage increased, more grenades, the turrets will be protected by shields and the action skill cooldown is faster and has a small chance to bypass death.
For most of the time, your shield will be full and the turrets will do the job annihilating everyone, if they don’t the enemies will be slaged and easily killed by Axton.

For this build first, let’s focus on the Guerilla tree and unlock the following skills: Willing, Onslaught, Grenadier and Double up.

Level 37-41: Only 4 points on Onslaught, kill skill: Killing an enemy increases your Gun Damage and Movement Speed for a short time.

Level 41-46: Points on Grenadier skill: Increases the maximum number of grenades you can carry.

Level 47: 1 Point on Double Up skill: adds a second gun to the Sabre Turret and both guns fire Slag bullets.

Now time to start building the Survival skill tree to get Gemini.

Level 47-52: Points on Pressure skill: Improves your Reload Speed and Shield Recharge Delay based on how much health you have. The lower your health, the higher the bonus.

Level 52-56: Only 4 points on Quick Charge, Kill Skill: Killing an enemy causes your shields to quickly regenerate for a short time.

Per level:
•Regenerates 1% of your Max Shields/sec.

Level 5:
•Regenerates 5% of your Max Shields/sec.

Level 57-58: 1 point on Mag-Lock skill: allows your Sabre Turret to be deployed on walls and ceilings.

Level 62-67: Points on Grit skill: You gain a chance to ignore damage that would otherwise kill you. In addition to not taking damage from the attack, you will instantly regain half of your Maximum Health.

Per level:
•4% chance of ignoring death

Level 67: 1 point on Gemini: Allows you to deploy two Sabre Turrets. Once the first Turret is deployed press [Action Skill] again to deploy the second.

Level 68-72: 4 points on Battlefront skill: While your Sabre Turret is deployed you deal increased damage.

Shield: The Bee, the sham

With this build, the skill points will be concentrated on extra gun damage and increasing all explosive damage.
Following this build will focus on Axton explosive damage, the turrets will be left aside.
This is a fun build because you will be the one in the action dealing huge damage, while you can deploy turrets to distract enemies’ attention and with Double Up even Slag enemies for you causing even greater damage.
Choosing your weapons will be important with this Axton explosive build, you will need to focus on weapons with extra explosive damage. Most of your guns will be Tedior manufactured.

***For this build, I recommend taking all your points off Ready and putting them on Willing and also pulling points off Preparation. At high-level Reload Speed is not so important as the weapons get better (better reload speed and bigger ammo capacity). For Healing, I recommend using the weapon Grog Nozzle.

Points from Preparation skill on Onslaught, Kill skill: Killing an enemy increases your Gun Damage and Movement Speed for a short time.

Level 32-37: Points on Grenadier skill: Increases the Maximum number of grenades you can carry.

Level 37-42: Points on Crisis Management skill: You gain increased Gun Damage and Melee Damage while your shields are depleted.

Level 42-43: 1 Point on Double Up skill: Adds a second gun to your Sabre Turret and changes both guns to fire slag rounds. Slagged enemies take additional damage from all non-slag attacks.

Now will unlock skills from the Gunpowder skill tree.

Level 53-54: 1 Point on Do or Die skill: Allows you to throw grenades while in Fight For Your Life. Also increases damage dealt with grenades and rocket launchers.
•Grenade Damage: +10%
•Rocket Launcher Damage: +10%

Level 54-59: Points on Steady skill: Reduces Recoil with all gun types, as well as damage dealt with grenades and rocket launchers.

Level 64-69: Points on Ranger skill: Makes you better at just about everything.

►Level 69-72: You choose where to put your 3 Skill Points, I would recommend either on Preparation or Healthy skill for better survivability.

Shield: The Bee, the sham, Antagonist