An easy way to get some awesome loot is to use the Golden keys to open Golden Chests but in order to get Golden Keys you will need shift codes. These Golden Chests will loot high rarity weapons/mods/grenades/shields the same level as your character.
If you a stuck in the game because of your weapons a not good enough, you are too lazy to farm for good weapons or you are too poor to buy a good weapon from Marcus, then Golden Chests is the right option for you!

We will do this Step by Step:
1. Get Shift codes
2. Use shift codes to get Golden Keys
3. Use Golden Keys to open Golden Chests

But because it can be confusing, all the news and releases are mixed up with the shift codes, here is an easy way to find shift codes:
https://twitter.com/dgshiftcode This twitter account reunites all the shift codes released by Gearbox for every Borderlands on any platform.

Scroll through these links above, Check for which Borderland game it is for, check the expiry dates, check for which platform it is for PC/PS3-4/Xbox:

When you have found a valid Shift Code, write it down, copy it or take a picture of it.

Use shift codes to get Golden Keys

Now you have your Shift code you need to change it into Golden Keys.
The best and easiest option is to enter them In-game.

Start Borderlands Pre-Sequel and stay on the main menu where you select your player. Click on Extras ( Here is Bonus because my game is in French )

Then select Shift Code and login or create an account if you don’t already have one:

Once your Shift code entered and submitted you now have GoldenKeys! Select your character and start the game.

This last step is the easiest and the best! Go to Concordia, to the Golden Chest and use your Golden Keys.

Open the Golden Chest and enjoy the loot! 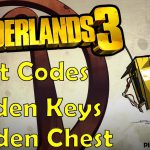